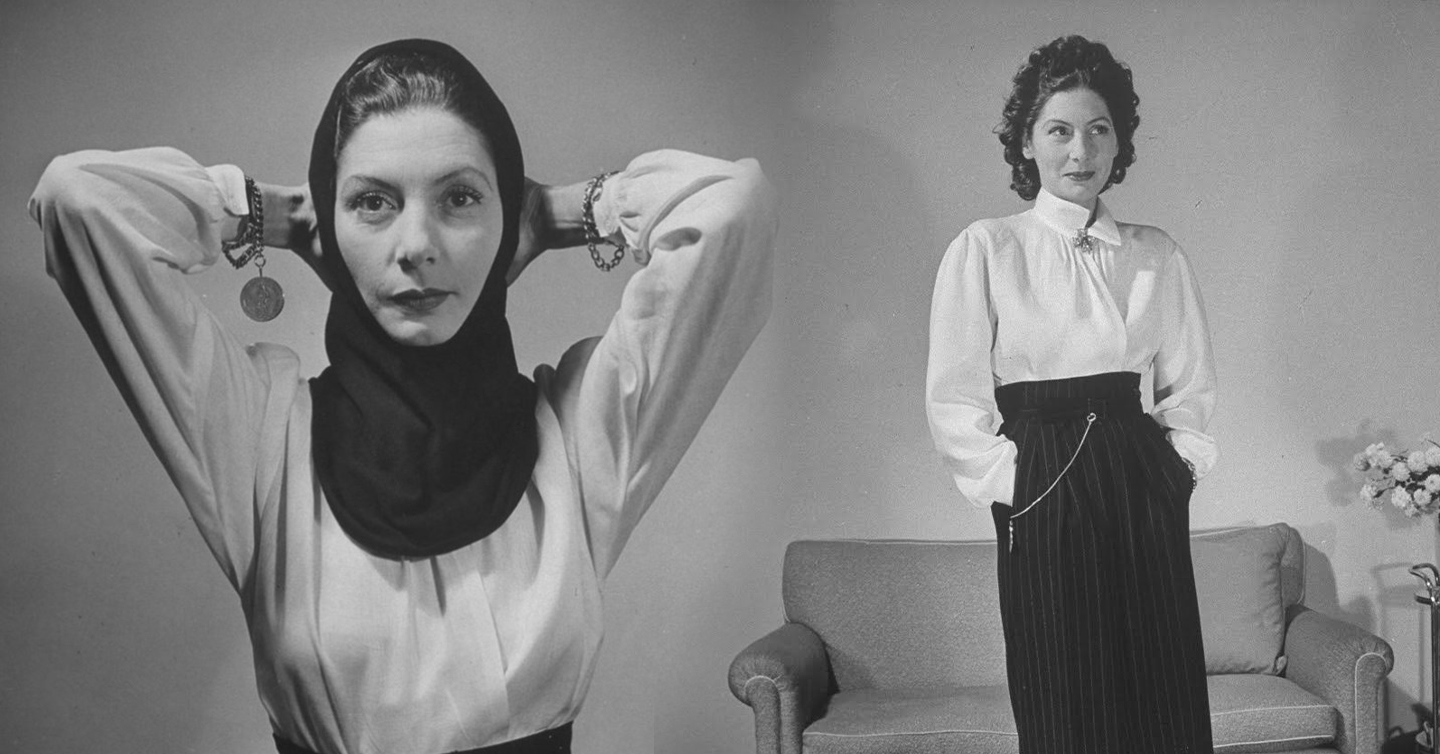 At this year’s Met Gala the Ukrainian designer Valentyna Sanina-Schlee, of whom not many people in Ukraine have heard, was remembered. She has created looks for Greta Garbo, Katharine Hepburn, Marlene Dietrich and other movie stars, participated in the formation of American couture and is the only Ukrainian designer whose clothes are represented in the leading American fashion museums such as the Fashion and Textile Museum and the Costume Center of the Metropolitan Museum of Art.

DTF Magazine tells the story of the designer who considered a mink coat to be a garment for a football match, hated high-heeled shoes, and called herself «the Gothic version of Greta Garbo».

Emigration and dreams of theater

Valentyna was a student in a Kyiv gymnasium and already then began to develop her own style: she redesigned skirts and did unusual hairstyles that did not conform to the rules of the gymnasium uniform.

Despite her experiments with design, she dreamed of becoming an actress and began attending acting classes in Kharkiv. There she played occasional roles in the theater. Valentyna met Olexander Vertynsky in a cabaret where the artists spent their time. It is unknown whether they had an affair, but Olexander was in love with Valentyna, and dedicated his works «Wild Wind», «Behind the Scenes» and «That’s All That’s Left of You» to her.

However, in 1917, when the October Revolution began, Vertynsky left for Odesa, and Valentyna left for the Crimea, where she met her future husband, the millionaire Georgy Schlee (he would later call himself George, in the American way).

According to Schlee, he met her at the train station in Sevastopol and they subsequently married. The couple traveled through Greece, Italy, and France, spending money, and according to George’s recollection, they were actually «eating up their jewelry».

While in Paris, Valentyna performed with the dance troupes Chauve Souris and Revue Russe, which shaped her vision of theatrical costumes and her own dramaturgy of style.

Although she was born in Kyiv, foreign media (including russian media) describe her as a «russian immigrant», because Kyiv was then part of the russian empire.

Becoming a designer in the United States

The couple settled in New York in 1923. She said about her life in America that she was the niece of russian Prince Serhiy Obolensky and was forced to leave the country because of the revolution. According to another version, she was a professional ballet dancer and actress, performed with Diaghilev’s ballet and traveled around Europe with her husband.

Both stories were fake, but she is listed in U.S. emigration records as a member of a traveling dance troupe. And this is hardly the only documentary evidence of the pre-American period of Valentyna’s life.

She never gave up the dream of becoming an actress in the U.S., but her terrible accent and poor English prevented her from getting roles. She also tried to establish herself as a designer, twice opening stores that were not successful.

However, her husband succeeded on the stock market and began to finance theatrical productions. The couple attended social events, where Valentyna’s design talent was noticed.

There was a fashion for beaded or fringed knee-length trapeze dresses and short haircuts in the 1920s. But Valentyna dressed in long dresses made of black velvet, with an accentuated waistline, and she turned her long hair into a sleek hairstyle. The stars who surrounded her at social gatherings began to take an interest in her work and ordered dresses for themselves.

She wore laconic dresses, but added theatricality to her images through accessories such as triangular hats and snoods, and once came to the opera wearing a hat filled with dry ice that made it look like smoke was coming out of her head.

They founded Valentina Gowns, Inc. in 1928. Valentyna designed clothes, and George ran her business. Clothing was gaining popularity, and Valentyna was invited to design costumes for some Broadway musicals. Theater critic Brooks Atkinson once wrote of her: «Valentyna creates clothes that already play a role before she even says the line».

In 1928 she opened a small store on Madison Avenue in New York City, which initially presented only 13 dresses. Sales reached $90,000 in the first year of business. Her dresses were unaffordable for most: the average price for a dress from Valentyna was $250 in the 1930s, and about $600 in the 1950s.

She began dressing the A-stars as well as the powerful women of the Vanderbilt family in the 1930s. She would later create costumes for Hollywood films such as «Idiot’s Delight» and «The Philadelphia Story».

Valentyna believed it was better to create complete wardrobe (from formal outfits to casuals) for a client than a single look. And that’s what she did for most.

Vogue writes in an article that only two designers, Valentina and Mainbocher, made couture in America in those years. Valentyna said that she «does not believe in fashion, only in individually dressed women».

Another magazine article, American made-to-order collections, featured 12 pages on the designers who were the faces of American fashion at the time. Among them are Americans Mark Mooring and Adrian, Spaniard Castillo, Frenchman Mainbocher and Ukrainian Valentina.

The designers showed their outfits on the models in the photo project. But Valentyna decided to model. She posed in a puffy blue dress with open shoulders, with a polka dot print, and in a black dress with massive jewelry on the neck.

Valentyna had a complicated personality, she did not compromise with her clients and would not let them choose the design or details themselves.

Valentyna tried to sell a sable fur coat (the only fur she liked) to one client, but she admitted that she had already purchased a mink coat. The designer replied «Mink is [the fur] for the football game». And then «stoat is for robes» was added to her selection of fashion rules.

She argued with the stars, too. Here are a few of the designer’s quotes that Vogue shows in the article.

«Do you want bows? — Then go to Macy’s!», she told actress Kitty Carlisle.

Another actress, the wife of Charlie Chaplin and later of Erich Maria Remarque, Paulette Goddard, came to get a dress for the premiere, and described the order as «something scandalous». «Scandal? — Valentyna looked at her carefully. — All right, but let it be a noble scandal».

Valentyna and George were a socialite couple, and the press covered their lives in articles. For example, in 1947 Life magazine reported on one of the cocktail parties with celebrity guests (movie star Greta Garbo was among those present) that the couple hosted at their home.

Greta Garbo became Valentyna’s closest friend. They were so similar that people even confused them. Sometimes Valentyna would sign autographs disguised as Garbo, when fans of the actress approached her and Valentyna called herself the «Gothic version» of Garbo.

Garbo wore Valentyna’s creations in movies, on red carpets and in everyday life; she became a walking advertisement for the Valentina brand.

There were many parallels between the lives of Valentyna and Garbo other than appearance.

One day, Valentyna’s husband caught Greta Garbo naked at a fitting with Valentyna. And some time after that they had an affair. He even bought an apartment for Greta in the same house where he and Valentyna lived.

In 1948 an article was published with the title Mrs. George Schlee in her New York apartment. Two of the photographs featured the interiors of the apartment, which Valentyna had arranged herself, she posed in an Indian costume in the bedroom, and in a dress with a hat in the drawing room.

«What you wear when you’re in your own home, — she says, — is like a costume for the role of yourself».

Spouses Schlee and Greta were romantically entwined until George left his wife for Garbo.

Valentyna closes her fashion house and retires in 1957, and George Schlee dies seven years later. He had a heart attack and died on a trip to Paris with Garbo. However, Garbo, unlike Valentyna, did not attend his funeral.

Neither of the women left the common dwelling house; they remained neighbors long after Schlee’s death. According to some information, they did not just hate each other. Through intermediaries, a plan and a strict schedule was drawn up for when each of them would leave or return to her apartment. Both women adhered to it clearly so they would not meet.

Valentyna died after a long battle with Parkinson’s disease in New York City in 1989, she was about 90 years old (she concealed her age, so the exact year of birth is unknown).

Valentyna’s business remained successful for 30 years, and she was called «America’s most important dressmaker».

In the 1930s she added elements inspired by European art, decorated dresses with Indian embroidery on the sleeves. In the next decade, she softened the broad-shouldered silhouette popular in those years, presented short dresses and created ballet flats that people wore with stockings. In the 1950s Valentyna’s evening gowns increasingly featured necklines.

As a designer, she wanted to create timeless images, clothes not defined by an era. She said that women should dress in a way that «…fits the century. Forget the year!»

Valentyna created the fashion for hairnets, low-heeled shoes, laconic dresses and was inspired by religious symbols even before Alexander Mcqueen or Givenchy.

She has also been called «the woman who creates fashion and serves as her own role model». Diane von Furstenberg, Carolina Herrera and Donna Karan are such role models in contemporary American fashion who emulate her legacy.

Some of Valentyna’s works are kept in the Museum of Fashion and Textiles and in the Costume Center at the Metropolitan Museum of Art. Valentyna is the only Ukrainian designer represented in these museums.

The Museum of the City of New York opened a large retrospective Valentina: American Couture and the Cult of Celebrity in 2009. It was the first large-scale exhibition that traced the entire creative journey and collected outfits, accessories, photographs and printed matter.

«Valentyna was a pioneer of fashion, dressed such stars as Greta Garbo, Katharine Hepburn, Katharine Cornell and Mrs. Randolph Hearst, and helped to invent American couture in this process. Her story was the most important success story in New York: she arrived in the city as a young immigrant and reinvented herself as the epitome of style and glamour, becoming an integral part of the fashion pages of history and a celebrity», the exhibition description says.

The exhibition was curated by journalist and international editor of Vogue, Hamish Bowles. It was he who spoke about Valentyna at the Met Gala on May 3, recalling the contributions of immigrants to American culture and paying homage to Ukraine in the fight against russia.

«She has established herself as an elite couturier, dressing and glorifying the most fashionable and famous women of the 20th century. One of her dresses is featured in the Costume Center exhibition at the Metropolitan Museum of Art dedicated to American fashion, which opened last year», Bowles said.

In 2022, the Costume Center updated about 70% of last year’s exhibits of the exhibition entitled In America: A Lexicon of Fashion and also added a Valentina dress to remind us of the Ukrainian designers who are an integral part of the world’s fashion processes and to support Ukraine.

«Fashion is the only art form that can respond so quickly and directly to the times we live in, thanks to the rapidity of fashion. Sometimes it’s done more consciously in response to what’s happening, and sometimes it’s more subtle and affects the collective consciousness», the museum’s chief curator Andrew Bolton says.