Banksy’s painting is being sold at a London auction. Funds from sales will go to support «Ohmatdyt» hospital

UPD [28.03.2022] Banksy’s anti-war painting CND Soldiers was sold at a British auction for 81 thousand pounds sterling (more than 3 million UAH).  The entire amount will be transferred to the children’s hospital «Ohmatdyt» in Kyiv

The British platform MyArtBroker put up for a «silent auction» an anti-war painting by Banksy CND Soldiers, created by the artist in 2003. All proceeds from the sale will go to the account of the «Ohmatdyt» Children’s Hospital in Kyiv, which treats children wounded as a result of russian aggression

The starting price of the painting is 20 thousand pounds sterling. The auction will end on March 27.

«Despite active russian shelling and airstrikes, “Ohmatdyt“ specialists remain in Kyiv to protect and treat the children and wounded who are transported to the hospital. Thanks to the hospital’s dedicated work, patients are receiving timely medical care in full, and the funds raised will ensure that this important work continues», — MyArtBroker wrote.

According to the British platform team, «Banksy has used art as a weapon against war throughout his career», and his «anti-war CND Soldiers image is more relevant than ever».

CND Soldiers’ work first appeared in front of the British Parliament in 2003. It was a reaction to the news that the British military would be involved in a war in Iraq. The painting depicts two soldiers, one holding a machine gun at the ready while the other paints a large red peace symbol on a wall with paint. 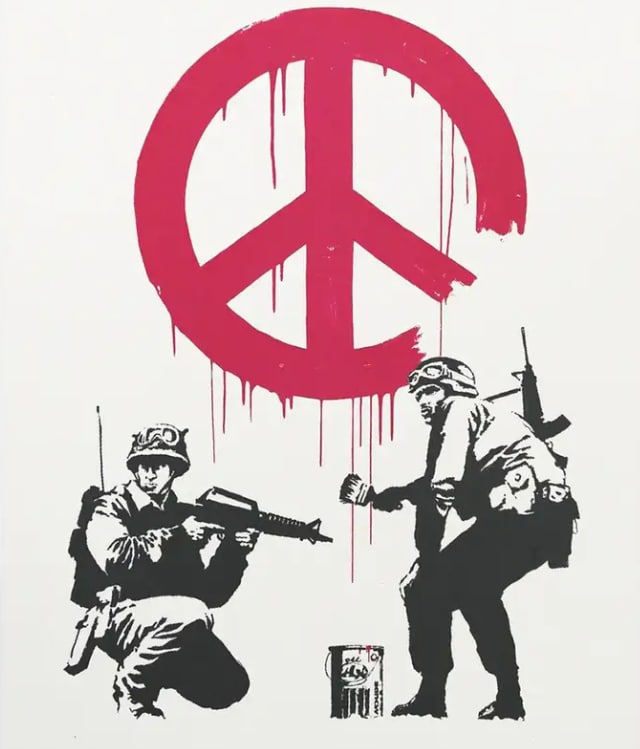 Pictures on Walls of London published 700 printed copies in 2005. The anonymous owner of one of them provided a copy for sale on MyArtBroker.