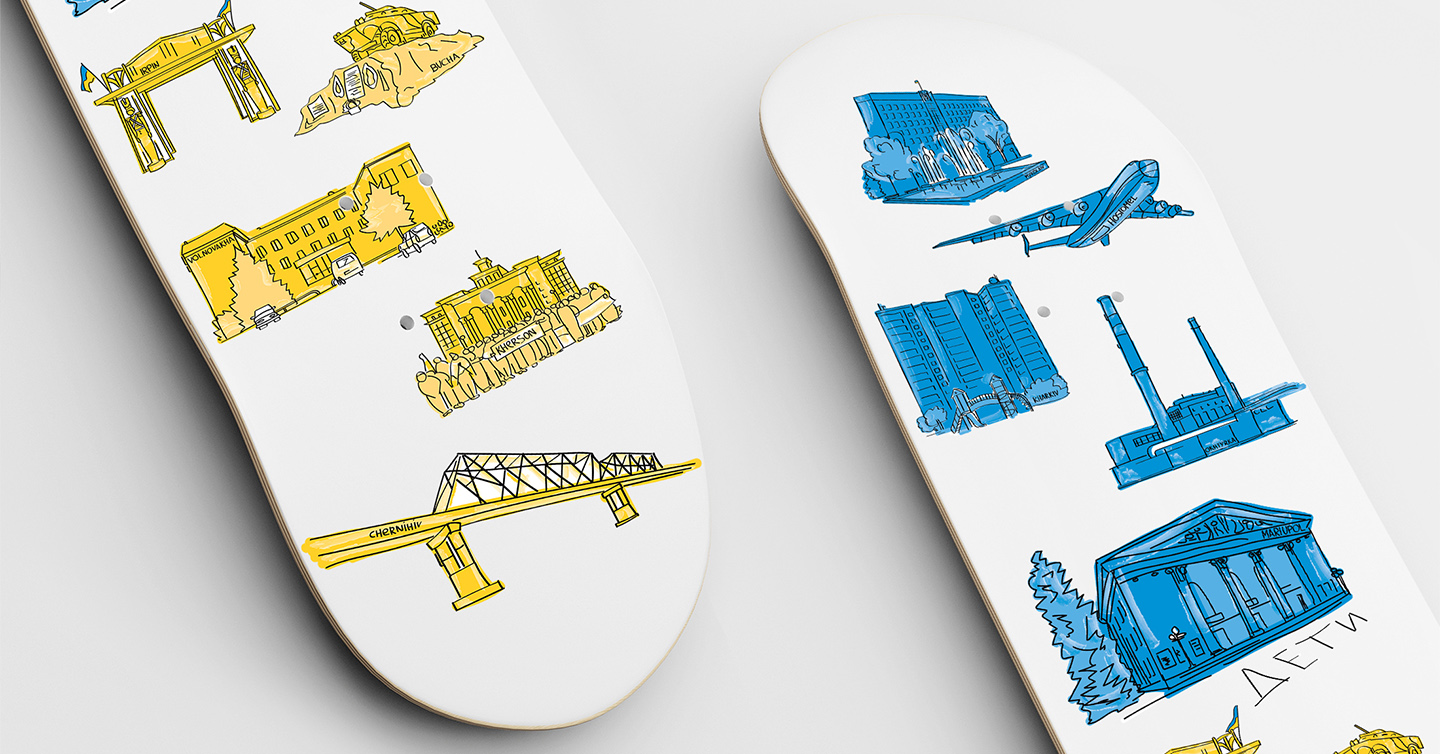 Ukrainian skateboarder, designer and editor-in-chief of online skateboarding magazine ZIRKA Magazine Andriy Boyar has launched Skate for Ukraine project. This is a series of skateboards with graphic prints depicting 10 monuments and sites destroyed by russian troops in Ukrainian cities. All proceeds from the sale of the skateboards will go to UNICEF Ukraine Foundation, which provides humanitarian and medical aid to Ukrainian mothers and children. DTF Magazine talked to Andriy and tells more about what you need to know about Skate for Ukraine

The idea of creating a project

Andriy had been creating skateboards in Kyiv before the full-scale war began. His team managed to start small production, produced test decks, and planned a full launch in the spring of 2022.

«After the beginning of the full-scale invasion of russia, the production of skateboards stopped, and in parallel with the work on ZIRKA Magazine I started writing various feature articles in international skateboarding media about the situation in Ukraine and the russian aggression, — Boyar told DTF Magazine in a comment. — It is impossible to produce skateboards in Ukraine during wartime, and even if we assume that something can be done, selling it locally is a bit inappropriate now, and sending something abroad is difficult and not economically profitable yet».

Andriy perceives a skateboard «as a canvas for the artist and an integral part of the brand». That’s why already in March the idea of the Skate for Ukraine project was born.

«I understood that the period of making the skateboards takes at least two to three months. Therefore, it is very important to create a drawing that will carry a certain message, the relevance of which will not be lost over time. We could have done some blue and yellow ornaments or something simple in patriotic colors, but there is already a lot of that. I wanted to convey certain messages, to show people abroad what russia has done, and the connection with something concrete, physical, familiar, in my opinion, works better than the image of the flag and the inscription “Ukraine”».

Andriy Boyar designed the print for the skateboards without the help of others.

One of the world’s major skateboard manufacturers, California-based Generator Distribution, became a partner in the project. They agreed to join the project, and made the first 100 decks for free «as a contribution to the project and our future victory». Ryan Stutt, a member of the team at King Skateboard Magazine in Canada, helped organize the processes.

«In general, the process of making a skateboard abroad is quite long and complicated. Good factories always have queues, minimal batches are made only in large runs or they don’t want to work with new customers. So it becomes difficult when you need skateboards quickly, in small quantities, and you do not know how and what you will pay for them. But I found Generator Distribution, email after email, contacts after contacts».

The graphics are based on the image of 10 objects in the cities-heroes of Ukraine, which were destroyed because of the actions of the russian army.

According to Andriy, he chose specific civilian infrastructure objects and composite images that «symbolize Ukrainian cities in the context of the war in different ways»: these include such objects as the Drama Theater in Mariupol, the Chernihiv automobile bridge over the Desna River, and the building of the Mykolaiv Regional Council.

For example, the designer made the «Mriya» airplane the symbol of Hostomel, one of the entrances to the city park, which was located a block away from his house the symbol of Irpin. He portrayed Kharkiv as the houses of the Northern Saltivka neighborhood, which had been shelled daily by russian troops since the beginning of the war, and Kherson as a crowd of people who gathered on the city’s central square with placards in support of Ukraine during the first days of full-scale war. 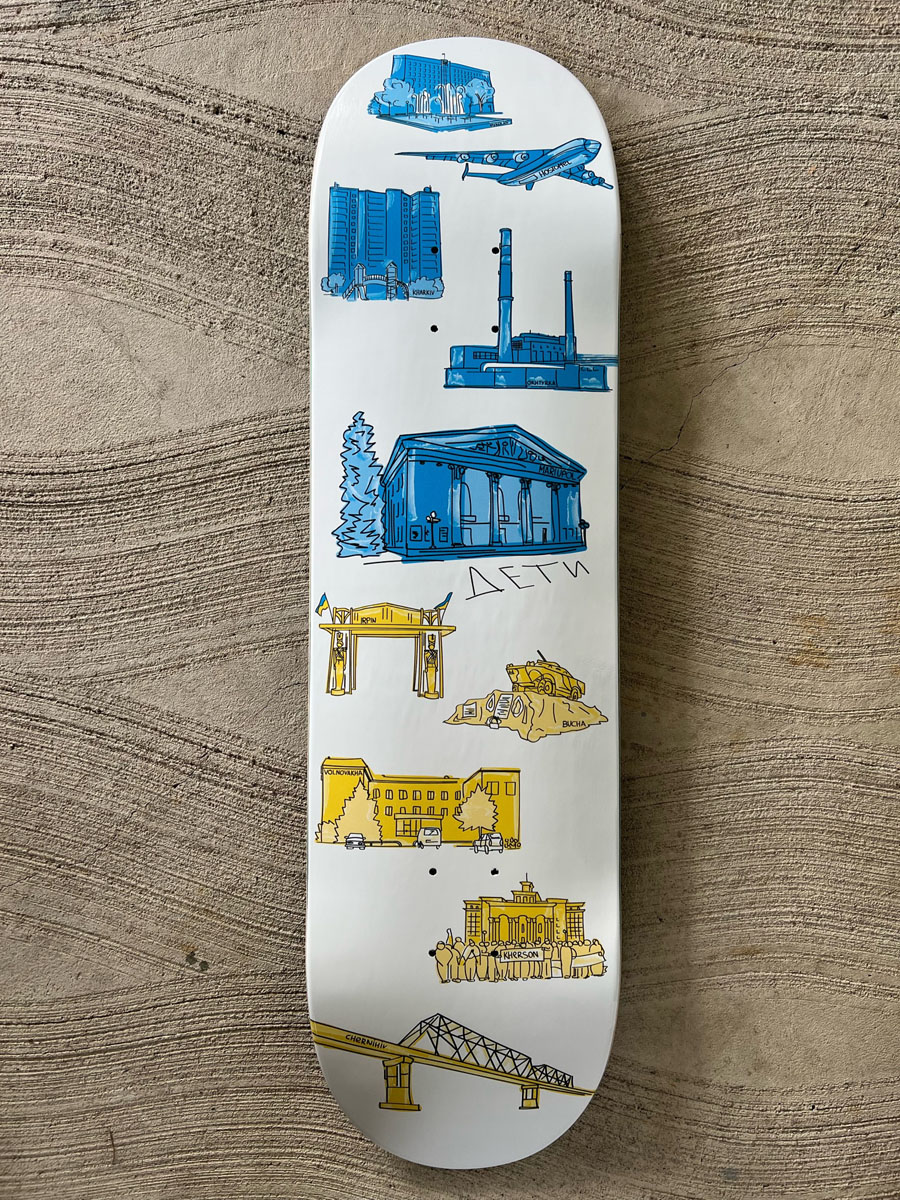 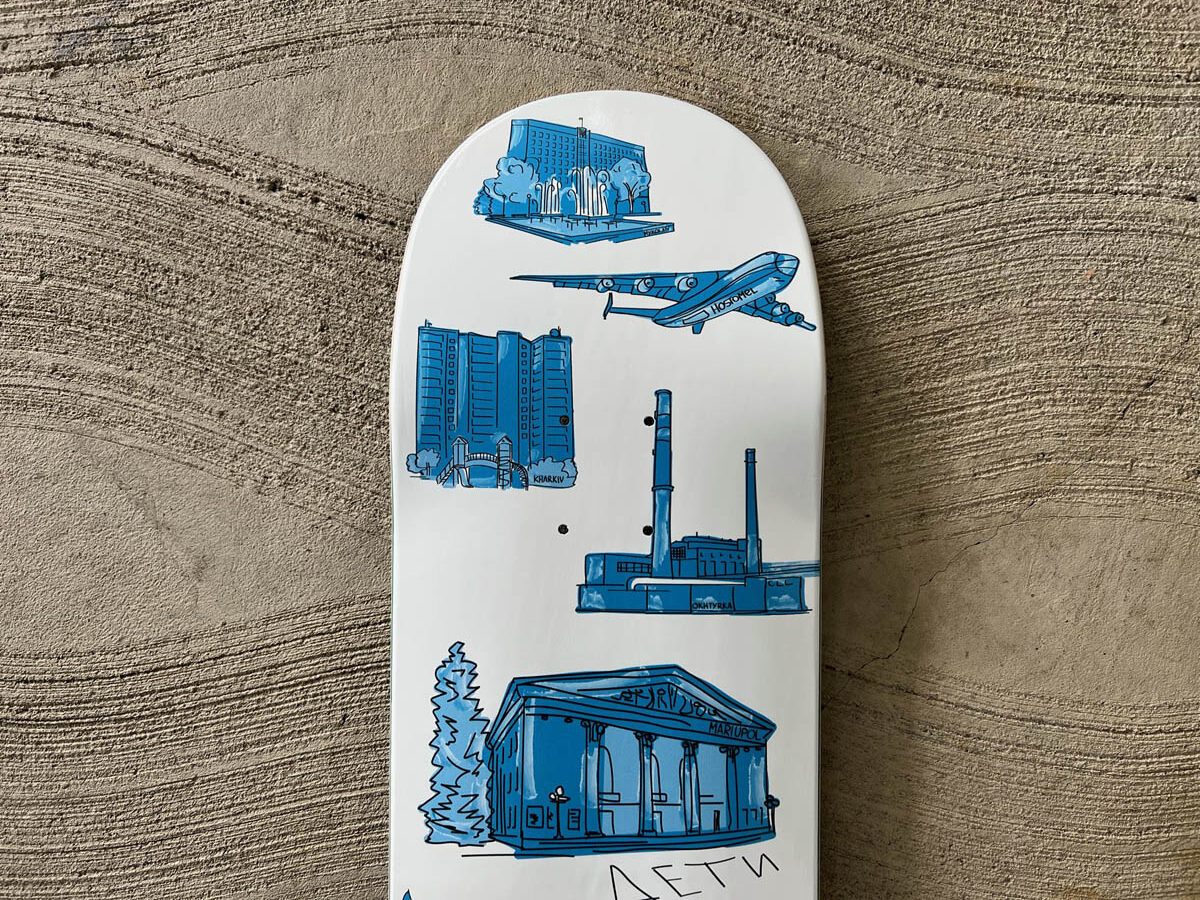 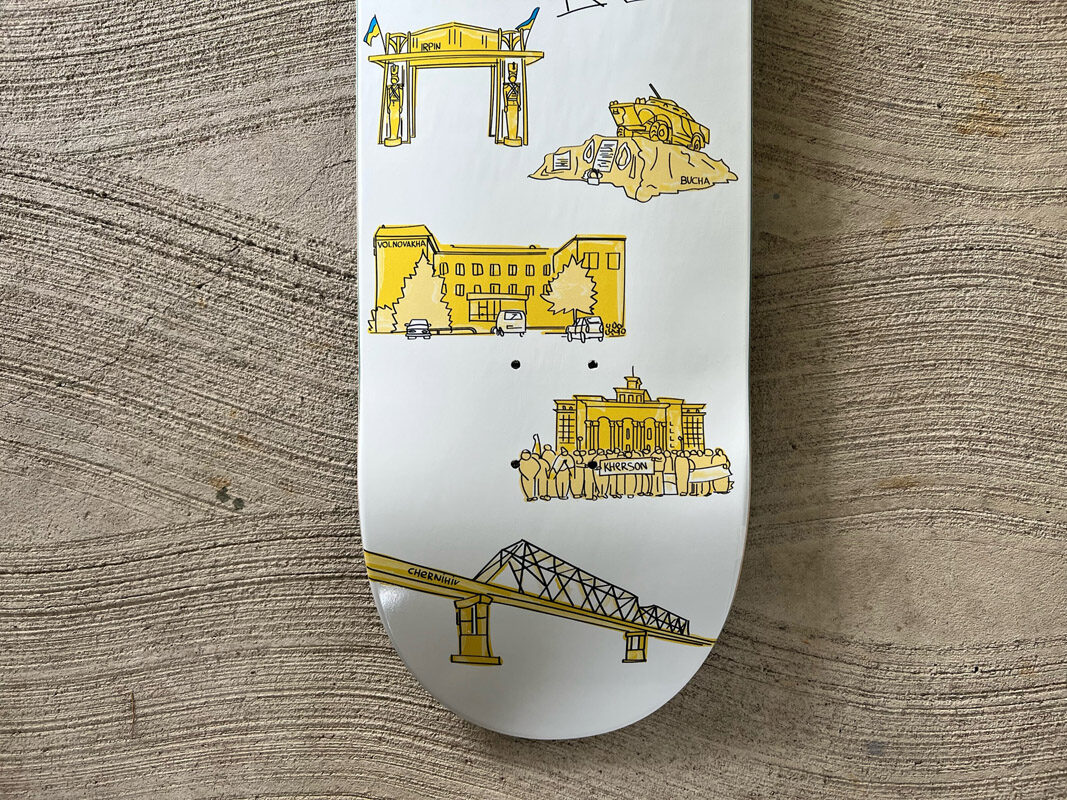 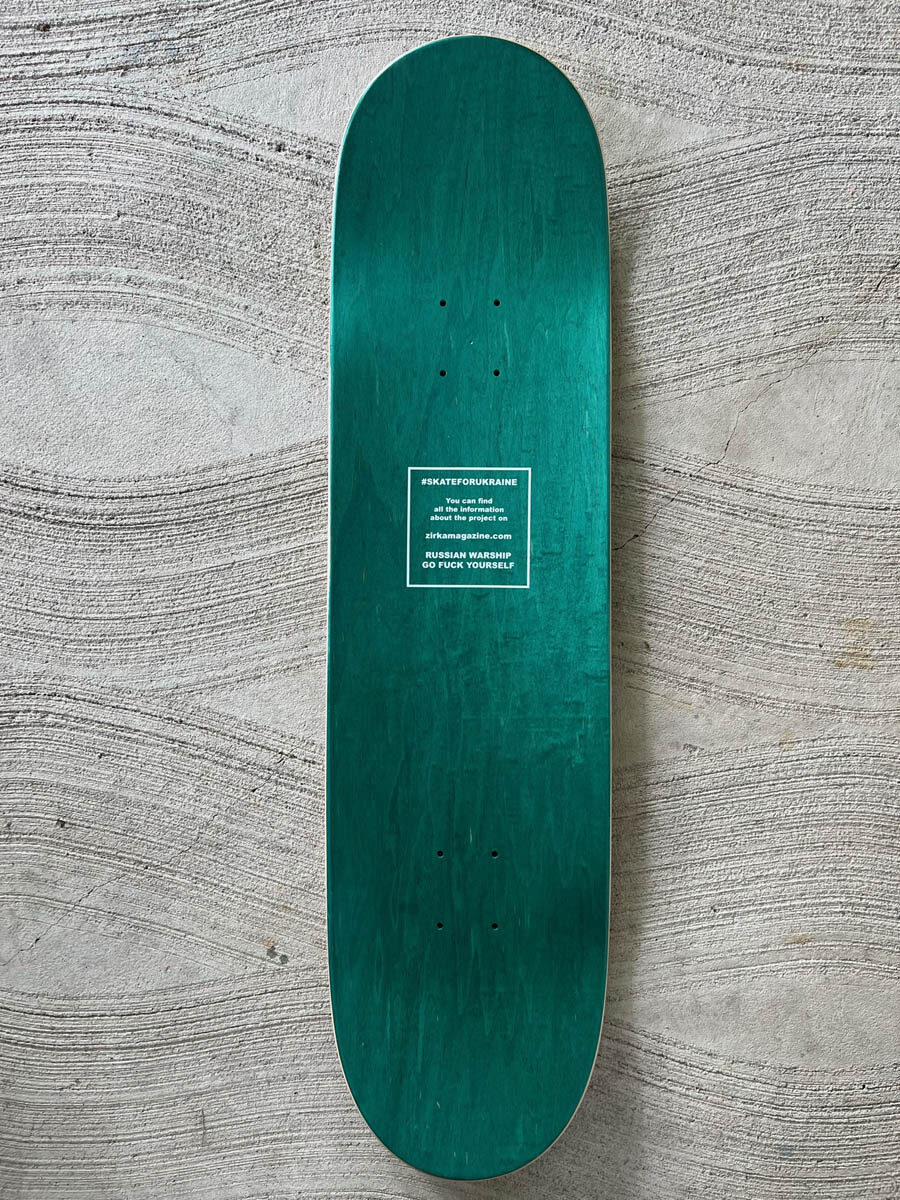 You can order skateboards on the site with the possibility of international delivery. You can buy a skateboard with delivery to Ukraine through the Instagram Direct Messenger of ZIRKA Magazine.

The goal of Skate for Ukraine

In addition to fundraising, the goal of the project is to inform foreigners of the devastation that russia leaves behind.

«I actively wrote to various skateboard media outlets around the world and tried to do joint articles with them to spread the word. That’s how my articles were published in King Skateboard Mag and SOLO Skateboardmagazine. This activity helped me when I started developing my skateboard project».

Andriy also started a separate page on the ZIRKA Magazine website, where he publishes a series of articles about the life of Ukrainian skateboarders at war.

According to Andriy, many people still believe that skateboarding is outside of politics, that «only evil putin is guilty, that russian skate brands are for world peace». He notes that he encounters this almost every time he tries to reach out to foreign profile media and explain that this is really not the case.

«They do not want to call russia a terrorist or an aggressor country. They don’t believe or are afraid to believe that most russians support the war, motivated by criminal responsibility and russians’ fear of the regime. They don’t want to write about banning russian skateboard brands in the world because someone out there posted a “no war“ picture on Instagram. I hope that my project will not only help our country a little bit financially, but it will also open someone’s eyes», he explained.