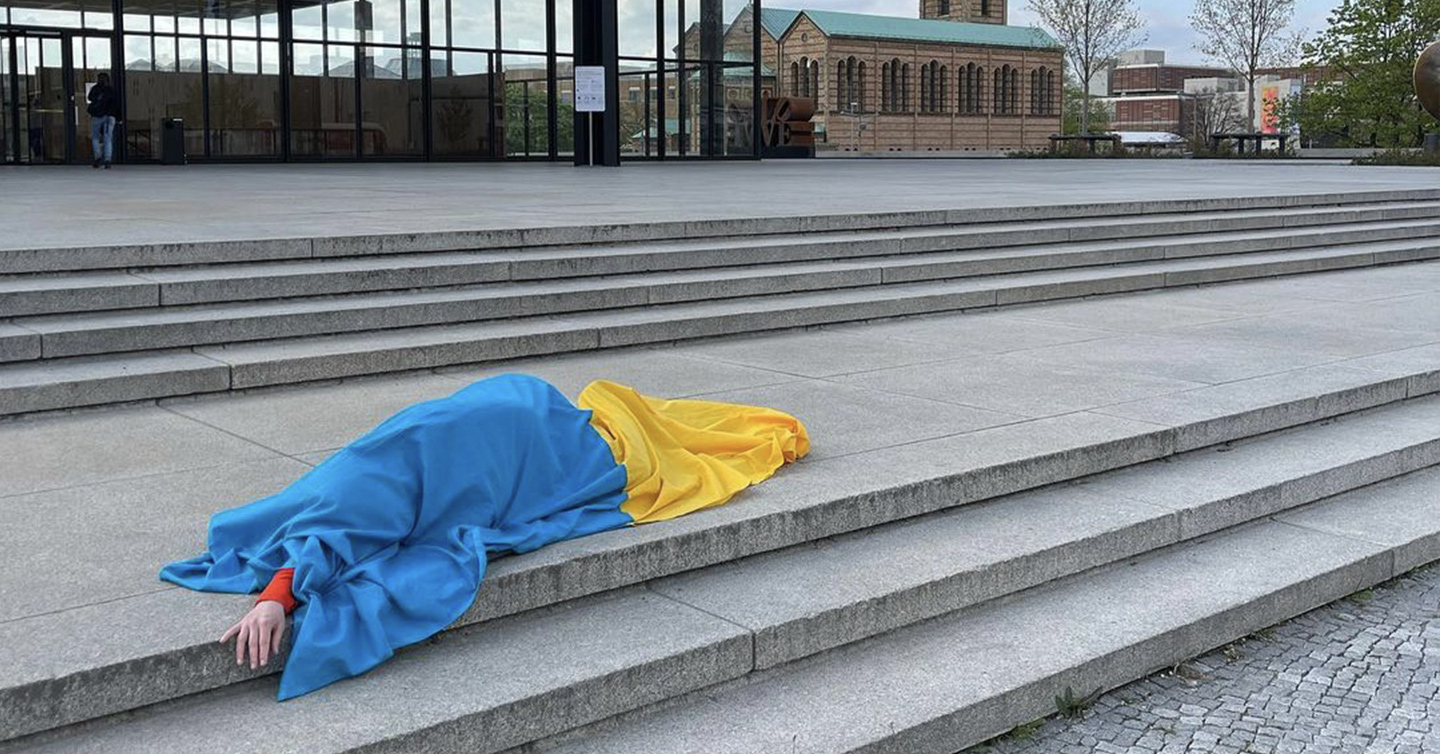 Ukrainian artist and actionist Maria Kulikovska will lie covered in a Ukrainian flag on the stairs of the Neue Nationalgalerie in Berlin at 12:00, 3:00, and 5:00 p.m. daily. 254 is her number as a registered migrant from occupied Crimea, which she, a native of Kerch, left in 2014

«I’m tired, even though I’m just lying there. My arm hurts all the time. I’m under the sun, covered in a flag — I can’t breathe. In the morning there was loud music, some kind of groovy hip-hop, and the guys listening to it were shouting “Glory to Ukraine!” all over the street, though with a strong accent. It was getting kind of anxious in the evening. I lay there, feeling again that something was wrong. And through the cloth I saw a stout man, who was just like a giant. He behaved strangely: sometimes he went very far away, then he came very close. He walked in different directions, walked around everywhere. Then he came very close and stepped almost on my head. After that, he went behind my back. I was defended – the man quickly ran away. That horror awoke in me again, I was afraid that something would be done and then what would happen to the child?», — she wrote on April 30.

Kulikovska first performed the «254» action on the stairs of the «Hermitage» Museum in Saint Petersburg at the opening of the Manifesta’10 international festival of political art in July 2014. She was also lying on the museum’s stairs, covered by a Ukrainian flag. At first she was arrested, but later released and banned from entering russia.

Maria Kulikovska is a Ukrainian artist, architect, performance artist, researcher, lecturer and curator. She works with the themes of body and corporeality, self-perception as a woman in today’s Ukraine, the vulnerability of the female body and gender inequality.

Kulikovska is a participant of MUHi (YoungUkrainianArtists) 2011 project . She is a nominee of Pinchuk Art Prize 2013. She is the author of architectural projects (in particular, the Shcherbenko Art Centre building) in Ukraine, Switzerland and China. She has given lectures and workshops on contemporary art in Kyiv (VCRC, Bottega gallery, PinchukArtCentre), Donetsk (IZOLYATSIA), Dnipro, Liverpool and Malmö.

For many years she has been creating a series of casts of her body from different materials such as soap, resin, and wax, filling them with, for example, chains, flowers, or balloons. Some of the body casts remained in the «IZOLYATSIA» Gallery in Donetsk after the war began in 2014. Representatives of the DPR seized the gallery and used the casts as targets for shooting. This was a serious shock for Kulikovska, which she reflected in a special project for London’s Saatchi Gallery in 2015 — the fully nude artist smashed her own body casts with a hammer.

The artist, together with her husband Oleg Vinnichenko, founded the international non-binary art space GARAGE33.Gallery-Shelter in 2019.