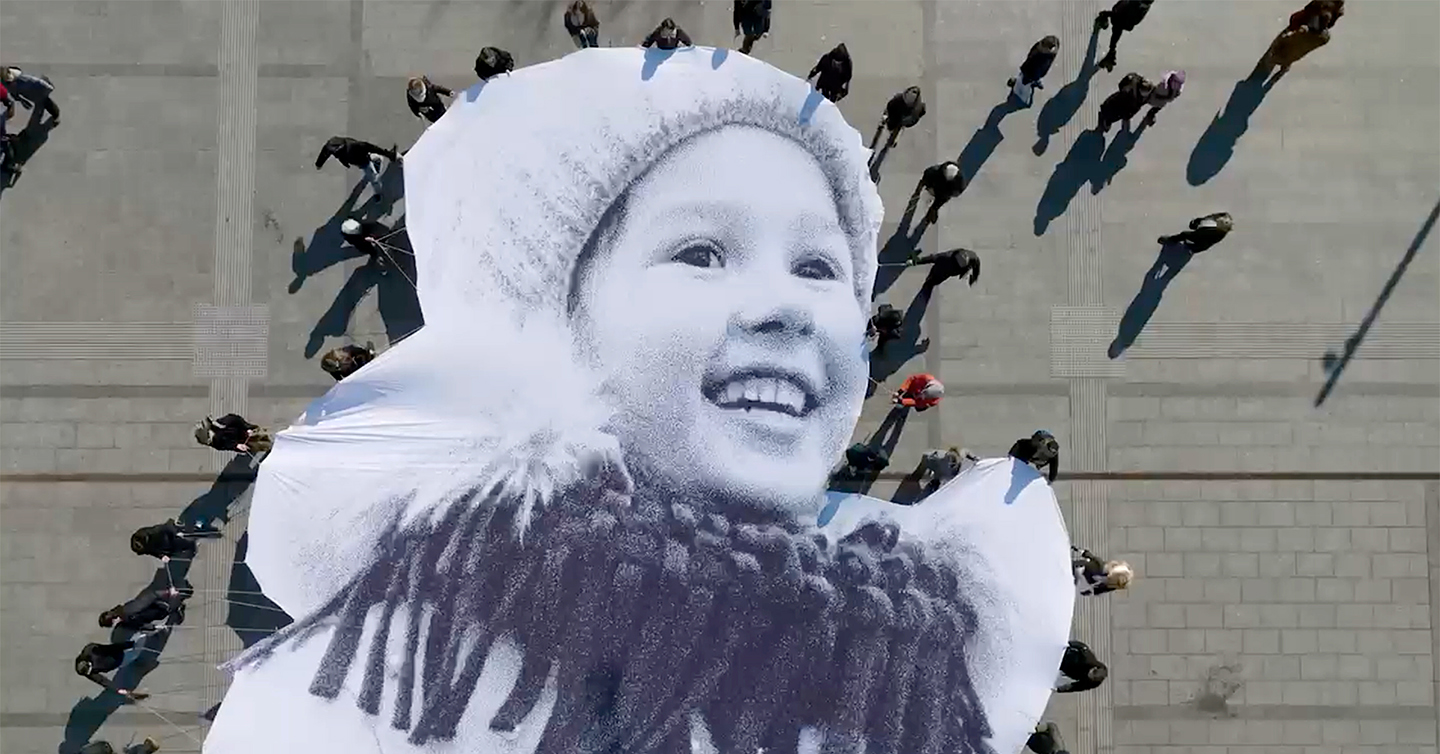 Artist JR created a project in Lviv in support of Ukraine

On March 14, a team of French artist and photographer JR came to Lviv to create a new project that became one of the covers of TIME magazine. It seeks to draw attention to the problems of internally displaced people who fled Ukraine because of russia’s full-scale invasion

The new work of the artist is based on a 45 x 21 meter canvas with a picture of a Ukrainian girl, which is held by about 100 people on Freedom Avenue near the Opera Theater in Lviv. The final result of the action was a large-scale drone shot that was placed on the cover of the new TIME.

The heroine of the photo is five-year-old Valeriya from Kryvyi Rih, whose family was forced to flee from Ukraine to Warsaw, although her father and brother remained in Ukraine. The portrait was taken by Ukrainian photographer Artem Yurchenko on the border with Poland.

«This little girl is the future and, in this war, she reminds us what Ukrainians are fighting for», — JR explained the idea. 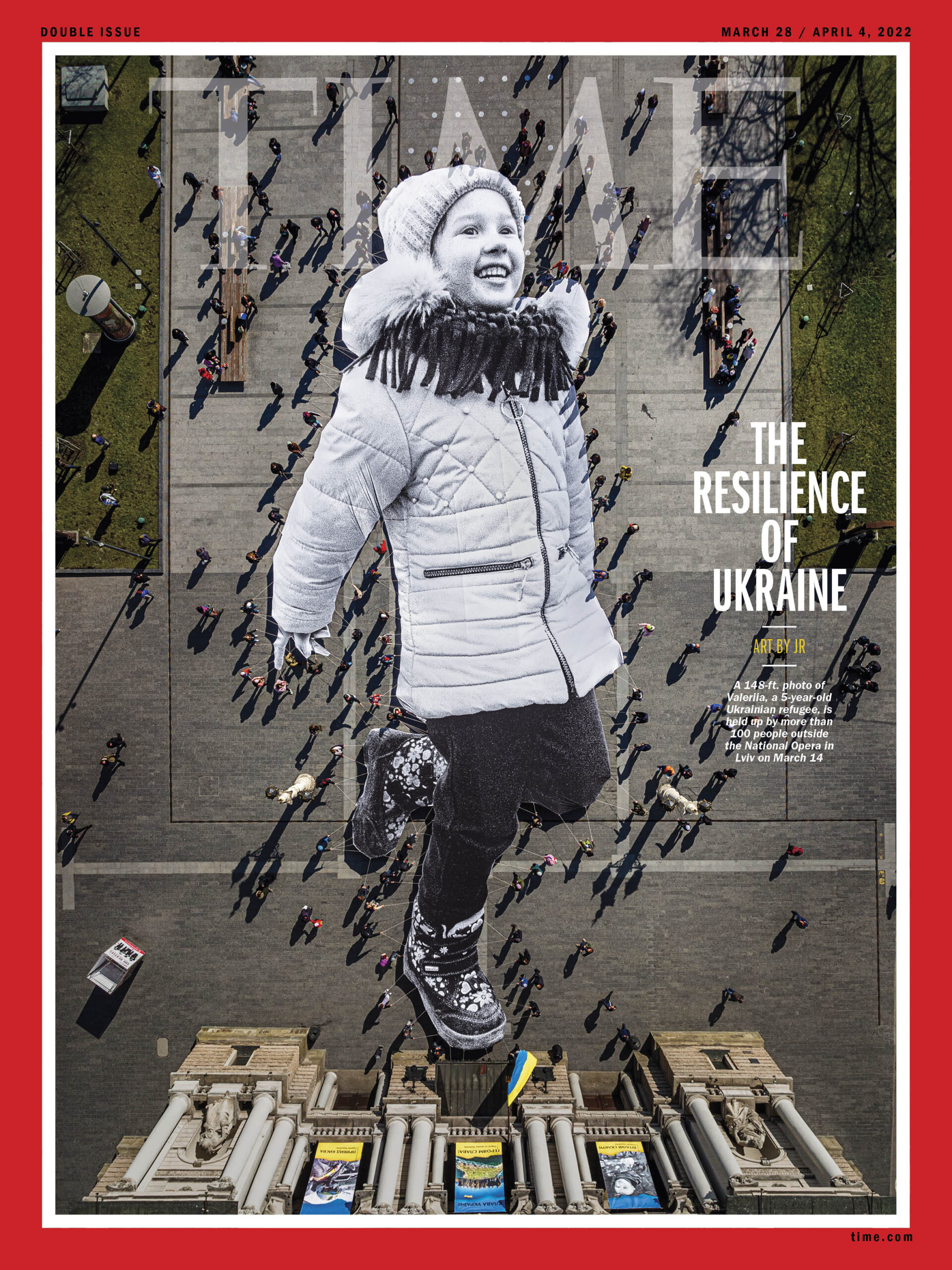 According to UN High Commissioner for Refugees Filippo Grandi, as of March 15, three million people had already left Ukraine because of the war.

In addition, JR’s photograph became the cover of the new issue of Time, and the artist’s team plans to sell the print. All proceeds will go to the account of the United Nations High Commissioner for Refugees, which helps internally displaced people from Ukraine.

On the trip JR was accompanied by French director Mathieu Kasowitz («Hate», «Gothika»), who shot his project in Lviv. Ukrainian artist Volodymyr Manzhos (WaOne) and musician Yuri Khustochka, who now lives in Paris, were the initiators of JR’s visit to Ukraine.

All in all, TIME presented a double issue with two covers.

The first cover by JR came out with the title «The Resilience of Ukraine». It depicts a smiling five-year-old girl who, although forced to flee Ukraine, acts as a symbol of hope. The second cover has quite the opposite mood — it is one of the photos from Maxym Dondyuk’s photo essay, accompanied by the title «The Agony of Ukraine». 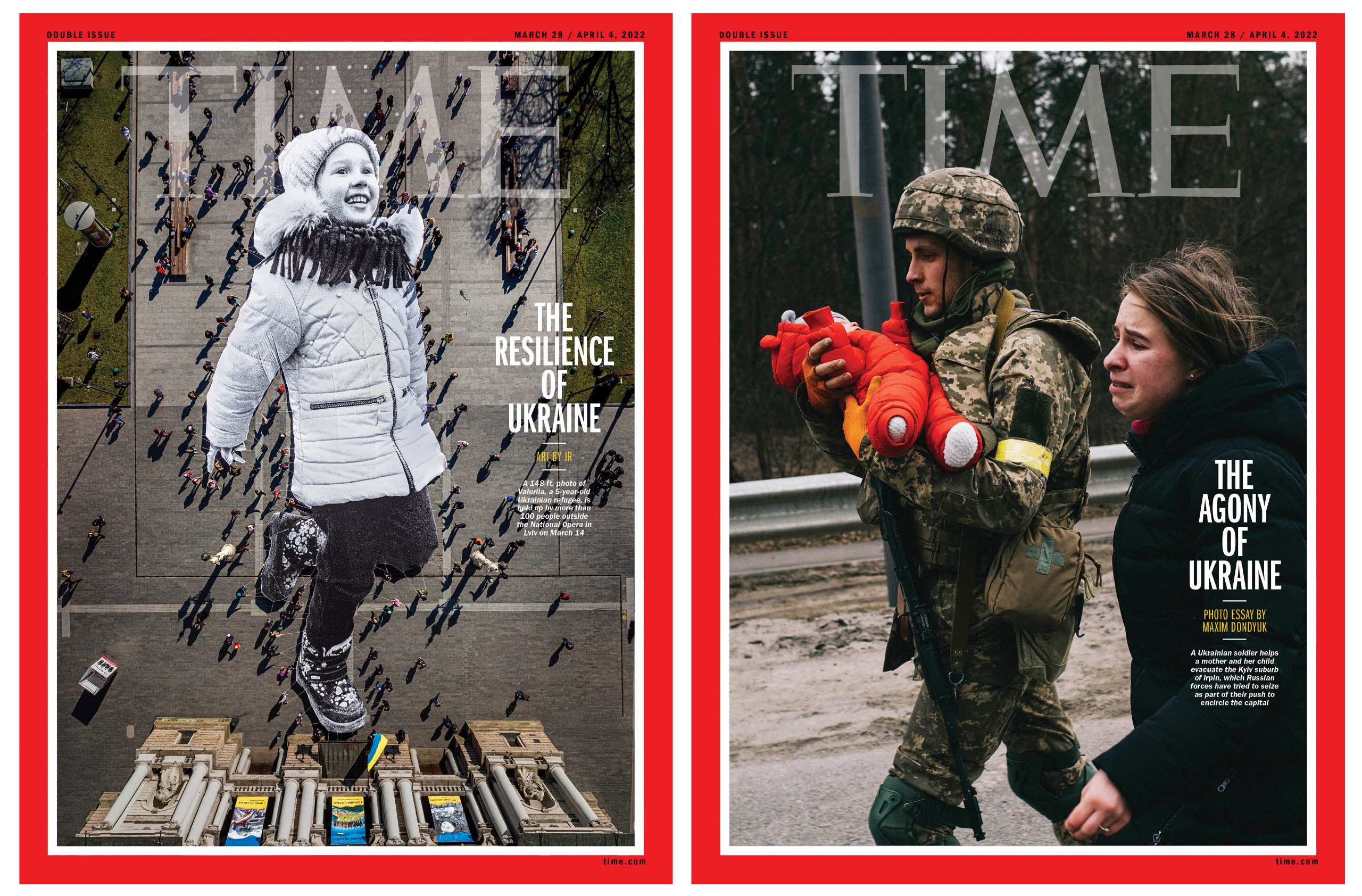 38-year-old Dondyuk has been filming the russian war against Ukraine since 2014. The beginning of the full-scale offensive, which russia launched on Feb. 24, 2022, caught him in Kyiv, where he has lived for many years. The photographer stayed behind and documented what was happening on the home front and on the front lines.

«I’m not leaving not because I’m a masochist, but because some pictures can change people, even society’s goals. And maybe it can help stop the war», — Dondyuk told TIME.

He was injured photographing the evacuation of people from Irpin on March 6. His mother was forced to leave Ukraine, while his father remains in the city occupied by russian troops.

JR — is a French street artist and photographer known for his art projects, murals and collages on social themes. His work has been painted in public spaces in Paris, Berlin, London, Rio de Janeiro, Shanghai and other cities around the world.

Among his most famous projects are the «pyramid» of the Louvre, which disappeared in 2016 and, conversely, received an «underground» continuation in 2019, as well as an installation with a portrait of a boy at the U.S.-Mexico border.

In 2020, the artist created a Time cover dedicated to self-isolation due to the COVID-19 pandemic. Read more about it here.