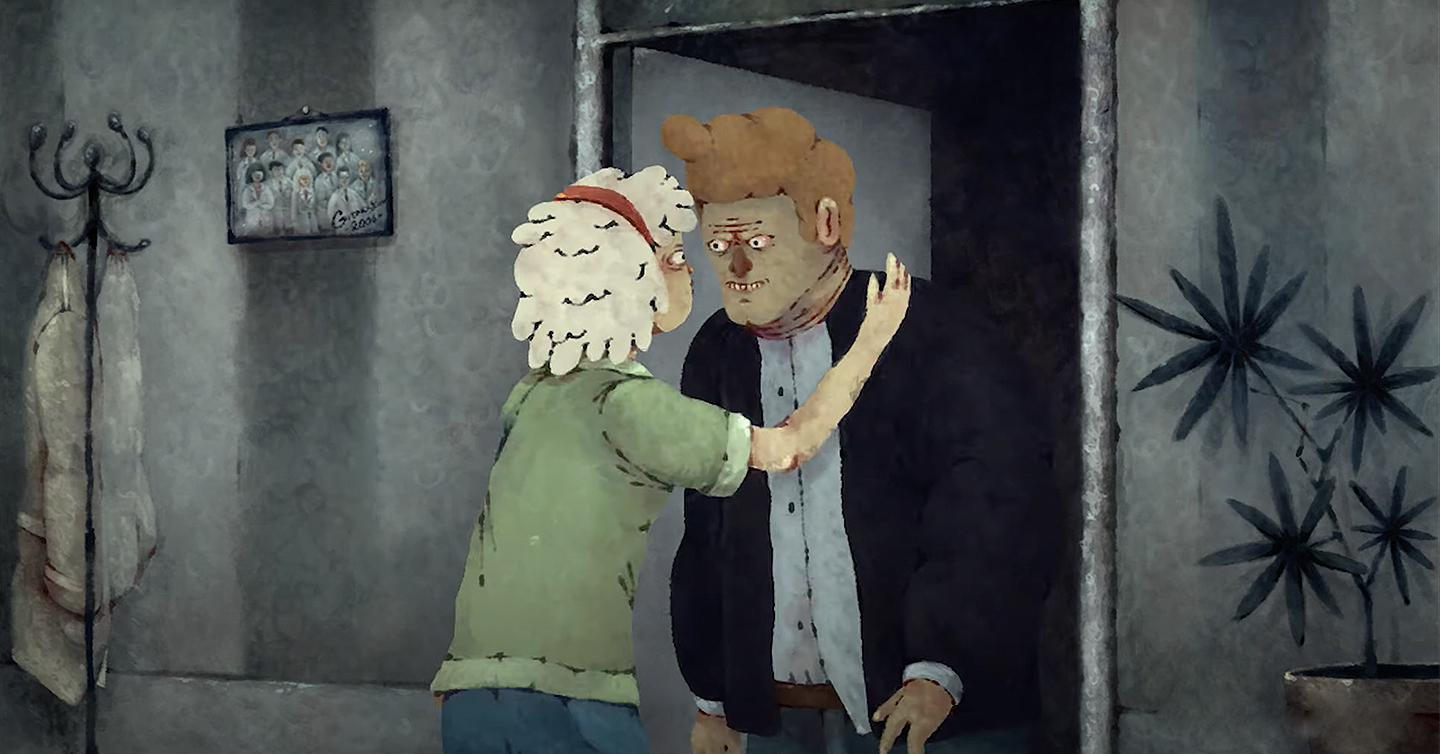 Animation is not the first thing that comes to mind when one thinks of the city of Dnipro. However, the key Ukrainian animation filmmakers live here. Mykyta Lyskov became famous thanks to «Deep Love», an animated postcard for his native city with black humor, Stas Santimov works in the genre of body-horror, fixing criminal chronicles, and Sestry Feldman shows the industrial world of the future, in which it is easy to recognize Dnipro, despite the fact that they are animating Kyiv.

DTF Magazine talks about four directors’ paths to animation, their genre specifics, and where to watch their films

Santimov started out working in design for mobile apps and then as an artist in the game industry. Since there was no one who could do animation in his department, he studied it himself. Now Stas is more often engaged in GIF animation, examples of which he uploads to his Vimeo channel. He is inspired by situations in the Dnipro crime chronicle, which he follows from time to time. Santimov creates his films in Photoshop with no outside funding, unless they are commercial orders. In 2020, he received the Audience Award at the Ukrainian competition KISFF for his film «The Surrogate» and a special award from the jury of the International Festival of Contemporary Animation and Media Arts LINOLEUM «For the strength of atmosphere and skill, as well as for a fresh perspective on the horror genre that will surprise the viewer».

This is the official music video for Portland-based ambient musician Matthew Cooper. In the story, a man checks into a hotel, puts on a mask over his eyes and gets into a carnival party, but suddenly the guests’ faces disappear and a stranger appears in the hotel room. There are many references to David Lynch’s work in the animation, in particular the singer looks like the character in Eraserhead, and characters who look like residents of Twin Peaks appear in the frame.

Santimov participated in the animated anthology The Preschool Poets. The project’s curators selected six poems from a hundred poems written by preschoolers in a course that lasted seven years. The Ukrainian filmmaker got an anti-war message called «Bullets» about relaxing and stopping shooting people.

The husband goes to his girlfriend’s house, and on the way he destroys a nest of fat worms. However, a stranger arrives on the scene, who turns out to be an even scarier monster than the creature of unknown origin. The animation is rougher this time — Santimov working in the body-horror genre. «It’s a film about sacrificing yourself for an old dream», — is how the director commented on the idea of the film in an interview, and he talked more about the production of the film in Making-of for the LINOLEUM Festival.

Mykyta Lyskov has been animating for 15 years, showing the reality of his native Dnipro as absurd, chaotic and abstract. His films often lack integrity, but in this way he tries to hold the viewer’s attention without dwelling on a single story. In addition to creating animated films, Lyskov also runs a telegram channel about authorial animation, gathering current news and explaining the context of the work. There, the director held a flash mob among animators, who were encouraged to create short films about the deaths of putin and lukashenko. Lyskov took part in dozens of festivals in China, France and Germany. His latest work, «Deep Love», was selected for the Annecy Film Festival, also called «animation Cannes».

«It was such a simple prank after uni, where I tried to do philosophical deep nerdy cartoons, — Lyskov said about the idea behind the film. — And then I just decided to poke fun, to show off. The film had been on my computer for several years, I did not send it anywhere. And then I decided to send it so they could see it and laugh». As a result, «I Bought a Bicycle» was shown at the «Molodist» film festival and it launched my career as a filmmaker. It consists of four stories that are not related to each other, but united by a melancholic mood and a single animation style.

Lyskov explores the limits of finiteness in a collection of short clips. The videos (not) ironically feature timecodes from Youtube to see when the film ends. And the director shows absurdity in the mini-scenes: a man is swallowed up by a television, smaller snails fall off the face of a huge snail, and zebras cross the road with an ATB bag. The filmmaker also inserted the sound directors’ favorite trope, «Wilhelm scream», a recorded scream from a little-known 1950s western that has since been heard from mortally wounded characters in «Star Wars», «Indiana Jones» and Quentin Tarantino’s films.

Lyskov created the frame-by-frame animation «Deep Love» during a year, based on the work of Estonians in the 1990s. This is not only the most famous animator’s work, but also the most titled one, ranging from the Ukrainian «Golden Dzyga» to the Jury Prize at Beijing Animation Week and the International Animation Film Festival in Paris. The director depicted Dnipro with black humor and vivid recognition: there’s the exploding head of the Lenin monument, graffiti with the phone numbers of a furnace repair and installation specialist, and the rhythmic melody of a traffic light. Mykyta Lyskov told us more about the making of the film in an interview.

Michelle and Nicol Feldman are street art artists who are easily recognized by their unique style of vivid animation in Kyiv and Odesa. They left their native Dnipro back in 2014, but they are still associated with this city if you ask animation directors who they can remember among their colleagues. They painted the buildings of Closer, the murals of Brave! Factory Festival and the walls of Podil. Now they go beyond street art, creating tattoo sketches, merch design and large canvases. They worked for a year and a half on the first animated series «YoYo. A cartoon about the future».

The plot of «YoYo. A cartoon about the future» is set in 2213, in a world where everyone can control their actions, emotions, and super-productivity thanks to built-in artificial intelligence. Two scientists save a newborn YoYo from implantation II, leaving him with the ability to feel. The hero is also able to travel back in time through dreams.

Sestry Feldman play around with the capital’s identity, emoji symbolism and the idea of artificial intelligence and talk about it in backstage. Michelle and Nicol created the yellow man YoYo many years ago. He is a recurring character in many of the sisters’ street drawings, most of which are in Odesa. A friend of the sisters came up with the name after he suggested creating a series of short videos about yoga for children featuring the character.

«We dubbed it ourselves at home and it was hard to watch, but when we showed the work to our friends at Studio 31, they decided to help with the dubbing and the sound. Their involvement inspired us to create the first season of five episodes», the sisters told DTF Magazine. 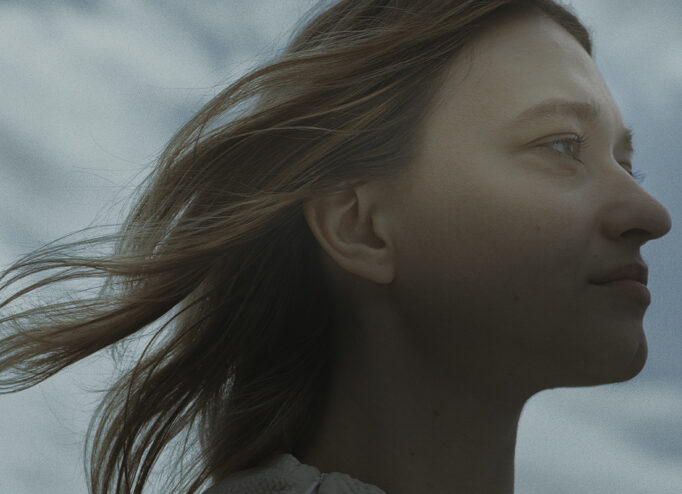 Actress Ryta Burkovska: «We are bearers of another culture and cannot play as Stanislavski taught us»