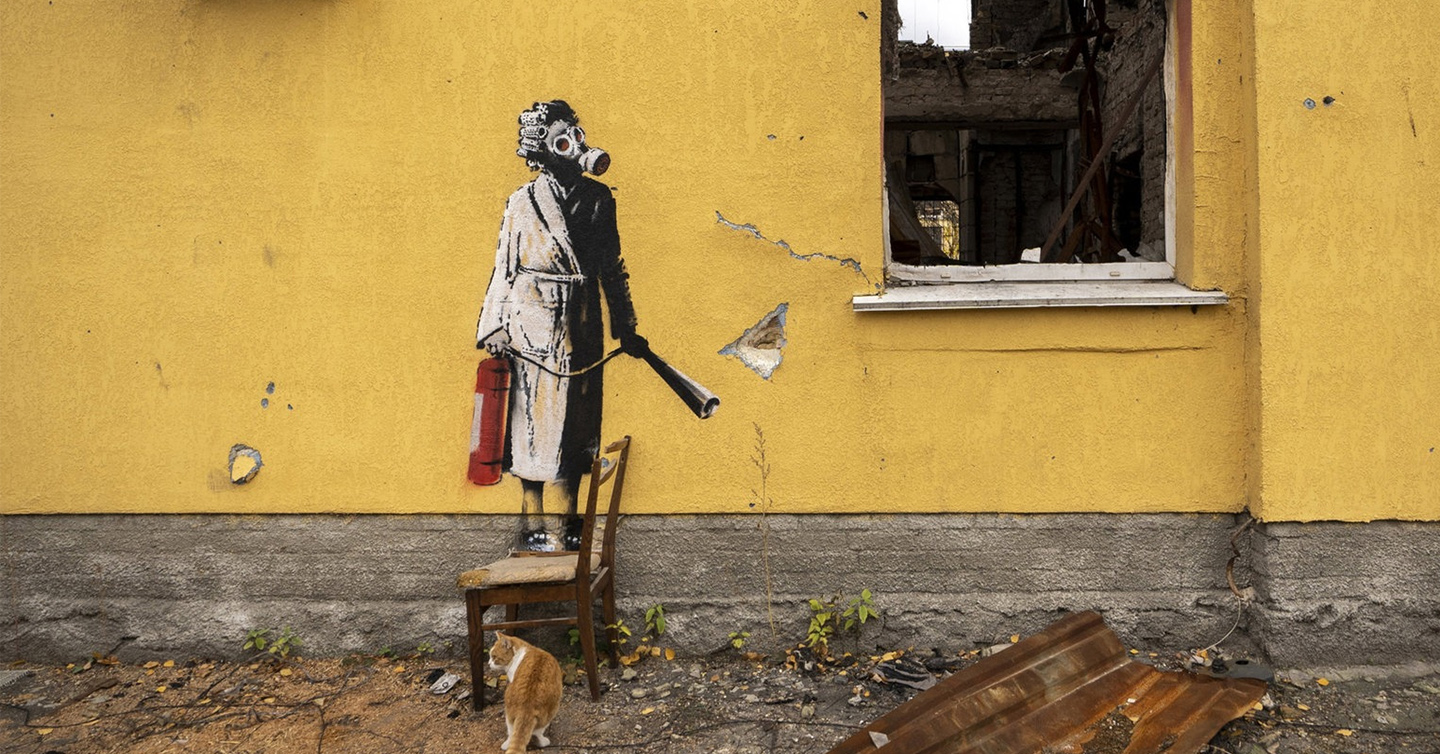 Banksy’s work in Hostomel, which was cut out of the wall, was valued at more than 9 million UAH

Employees of the main police department in the Kyiv region said that the value of one of Banksy’s works in Hostomel — more than 9 million UAH (more than $220,000) — was determined by an art expert examination. In December someone tried to steal a painting depicting a woman in a gas mask

In a comment to «Graty», representatives of the National Police clarified that the exact estimated cost of the work is 9,041,850. It is not known who exactly conducted the examination and evaluated the work.

According to the police, on December 2, a group of people from Kyiv and Cherkasy dismantled graffiti with a piece of wall, namely with insulation, and tried to transport the graffiti using wooden boards and polyethylene, after which they were stopped by the police. Law enforcers detained eight people and seized the graffiti, which is now under protection.

The organizer of the theft was 32-year-old volunteer from Kyiv Serhiy Dovhy. On December 30, investigators of the National Police reported a suspicion of attempted theft of property on a large scale under martial law. Now Serhiy faces from seven to 12 years of imprisonment with confiscation of property.

In an interview with «Graty», Dovhy also said that he had been following the work of the British artist for about 10 years and «wrote him a letter» back in August asking him to publicly support Ukraine, but received no response. He added that a few days before Banksy confirmed the authorship of seven works in Ukraine, he learned that the destroyed building with the graffiti of a woman in Hostomel was going to be demolished in the future, so he decided to cut the painting out of the wall.

According to Serhiy, he planned to sell the graffiti he cut down at an international auction and donate all the proceeds to the Ukrainian army. He also turned to a videographer who could record him cutting off the «Woman in a gas mask» in order to use the video as proof of the originality of the work.

«I would write to Sotheby’s because they’ve been selling Banksy’s work for years, — Dovhy explained in an interview. — If they asked me like “Who are you?” then I would write to some smaller auction house».

At the same time, the prosecutor’s office claims that Serhiy «planned to dispose of the proceeds of the sale at his own discretion».

«I resent the wording «secret theft». Everything took place in the morning between 10 and 11 a.m., in the open, with civilians and the military walking by. In addition, the process was filmed on two cameras by videographers», Dovhy said. He pleads not guilty and is ready to defend his innocence in court.

«Graty» detailed the story around Banksy’s work in Hostomel. You can read it here.

How much Banksy’s work used to sell for

The owners of a building in the British city of Nottingham sold part of a wall with Banksy’s graffiti «for a six-figure sum» in 2021 — the exact value of the deal was not disclosed. Banksy had painted the image of a girl spinning a tire the year before.

The owners of the house said that at first they planned to give the graffiti to a local charity, but for several months they could not find someone who would «take responsibility». So then part of the brick wall with the graffiti was cut out.

In 2021, a wall with Banksy’s drawing «Crowbar Girl» was sold at an American auction. The artist created the work in the summer of 2021 on the wall of the electrical shop in Suffolk, but the store was sold, the wall was removed and put up for sale. It was purchased for $2.4 million.

On November 11, Banksy published his first post on Instagram after nearly 11 months of silence — it was his work in Borodianka.

The artist further confirmed to The Art Newspaper that he had created seven works in Ukraine. The British artist’s graffiti can be seen in Kyiv, as well as in Irpin and Borodianka, «some of the places most affected by russian bombing». The Art Newspaper specified that the new works were Banksy’s first public murals in more than a year. On December 17, Banksy showed a minute-and-a-half video about his trip to Ukraine.

In November, local authorities in Borodianka, where two of Banksy’s works are located, said they planned to move the artist’s works to a museum.